Province didn’t have residential schools, but there were schools with same mission

When it comes to schools for Indigenous children, New Brunswick has its own dark secrets.

A residential school was never established in the province, but it was home to institutions with the same objective — to assimilate Indigenous children into settler culture.

Across the country, people have been grappling with the discovery of the remains of an estimated 215 children found buried near a former residential school in Kamloops, B.C.

What many in New Brunswick may not realize is that the province had some of the earliest schools established to separate Indigenous children from their families, language and culture.

The early schools pushed a Protestant message on Indigenous children, who received little in the way of an education and were ultimately forced to work as unpaid labourers.

We do think that there’s no history of residential schools here, so we have not been forced to confront this part of our historical past,” said Nicole O’Byrne, an associate professor at the University of New Brunswick’s law faculty in Fredericton.

“It’s hard to reconcile when you don’t know the full scope or nature of the problem.”

O’Byrne has been researching the first of the early schools, the Sussex Vale Indian Day School, established in the late 1700s on the grounds of the present-day Trinity Anglican Church in Sussex. 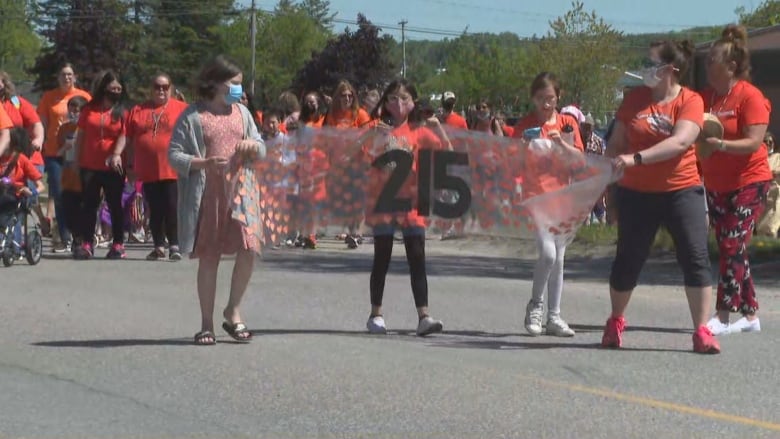 People in Metepenagiag First Nation march last week to pay tribute to the estimated 215 children whose remains were found buried at the site of a former residential school in Kamloops, B.C. (Gary Moore/CBC)

“Here what we’ve got is another tragic chapter in the history of Indigenous and non-Indigenous relations in New Brunswick that, hopefully, we can grapple with,” she said.

“We can understand more fully and then we can try to reconcile and move forward together.”

New Brunswick’s history with Indian day schools starts with the Society for the Propagation of the Gospel in New England, also known as the New England Company.

The company was created in England in 1649 as part of efforts to convert people in the New World to the Protestant form of Christianity.

In 1787, after the American Revolution and the arrival of Loyalists in New Brunswick, a board of commissioners was set up on behalf of the New England Company.

Board members consisted of people who were later remembered as pillars of New Brunswick society at that time, including Thomas Carleton, the first lieutenant-governor; Rev. Jonathan Odell; Ward Chipman, solicitor general of New Brunswick; and the chief justice, George Duncan Ludlow.

That board used New England Company money to buy land for schools.

The first one was Sussex Vale, and two others were established shortly after, in Woodstock and Sheffield, along the Saint John River.

In Sussex, English settlers had to persuade Indigenous parents in that part of southern New Brunswick to send their children to the new school run by Rev. Oliver Arnold. 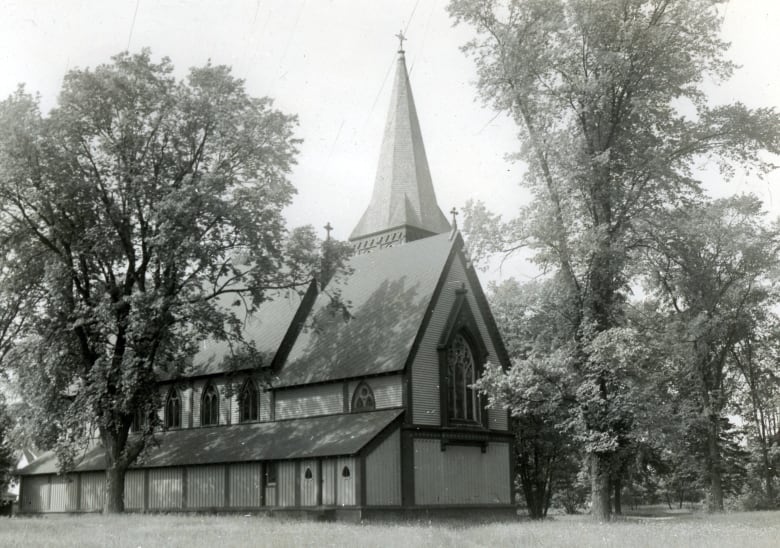 The Sussex Vale Indian Day School was built on the grounds of the current Trinity Anglican Church in Sussex. (New Brunswick Provincial Archives/P349-210)

The settlers told Indigenous community members they could oversee some of the education of their children as a “joint venture,” O’Byrne said.

That didn’t happen, but the school’s founders didn’t get the Protestants they wanted either.

By 1803, five members of the New England Company commission had quit because they felt not enough Indigenous students were joining the Protestant church or learning English ways, O’Byrne said.

“By that they mean it’s not stripping the Indigenous kids of their Indigenous identity effectively enough,” she said. ‘The school is not working.”

The problem, the commission believed, was that Indigenous children were still in contact with their parents when they returned home from school.

“They’re going back and forth, they’re kind of living both worlds,” O’Byrne said.

In addition, many in the Indigenous community had already converted to Catholicism. Catholic missionaries were in New Brunswick and Nova Scotia 200 years before the Indigenous day schools started.

“They’re finding it hard to convert these Catholic Indigenous people over to the Protestant religion,” O’Byrne said.

In 1804, all activities at the school were suspended.

In 1807, a new program was introduced, this one a form of indentured servitude combined with a promise of some schooling.

Under contracts signed by Indigenous parents, children were sent to live with settlers in the area, and they were supposed to learn to read and write and learn a trade.

“The kids are supposed to get educated just enough so they can be apprenticed out to learn a trade,” O’Byrne said.

The subject of one contract that O’Byrne found was 13-year-old Francis Paul, whose mother, Sarah Paul, was a widow in the Saint John area and signed him up with a shoemaker in the Sussex area.

O’Byrne said it’s likely she had trouble providing for her family. The plan would have been to teach Francis how to become a shoemaker and teach him some reading and writing.

“That was all pretty iffy,” she said.

The shoemaker would have received 20 pounds a year from the commission to train and take care of Francis.

It’s likely many children became domestic servants or farm labourers instead of actual apprentices, O’Byrne said, and the settlers collected the money from the company anyway.

“Instead of hiring their own labourer, they get a kid that is an apprentice and they get subsidized for that. It’s great for the settlers.”

Francis would have been required to work under contract until he was 21.

“Then he’s supposed to have enough knowledge and enough training from living in that household as an apprentice to go off and be part of the economy,” O’Byrne said.

Andrea Bear Nicholas, professor emeritus at St. Thomas University in Fredericton, said the program was one of indentured servitude and worse.

“Indentured servants were basically treated like slaves,” said Bear Nicholas, who has been researching the history of several Indigenous communities and came across documents related to the program.

A report from 1822 found at the New Brunswick Museum in Saint John indicated that some children were never taught to read and didn’t know the alphabet, Bear Nicholas said. Others forgot their Indigenous language entirely.

“It’s shocking even now to be reading this sort of thing,” she said. “To know this was going on under the nose of our people.”

“They were already Catholics,” O’Byrne said. “They already knew their language.”

Children as young as eight months were turned over to non-Indigenous families, and the children’s parents were paid a stipend to stay away.

The children didn’t get an education, but they provided labour for the families they were living with, O’Byrne said. There are documents indicating girls were often sexually exploited. 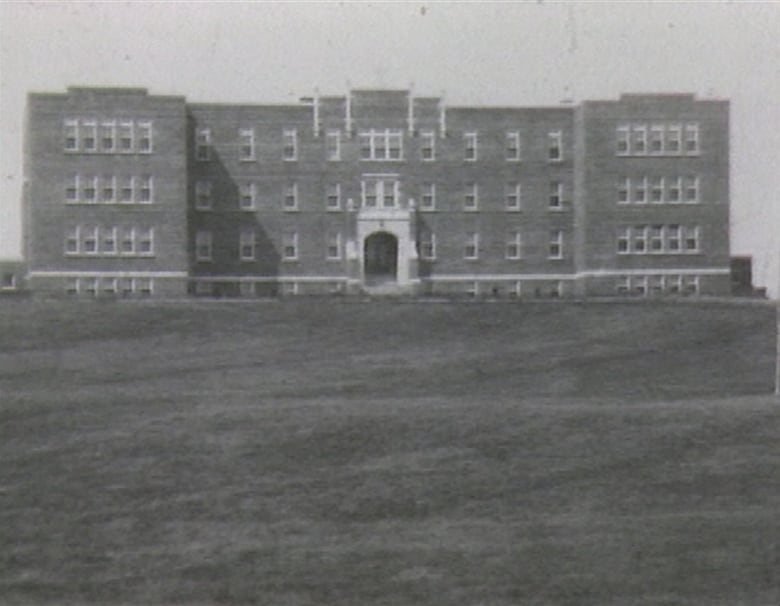 The Shubenacadie Indian Residential School in Nova Scotia operated from 1929 to 1967. (CBC)

There wasn’t a limit to the number of children a family could have. Rev. Oliver Arnold himself had five or six, according to documents, O’Byrne said.

Documents also show a Molly Gell was sexually exploited by Arnold’s son and got pregnant. Arnold took the baby as another apprentice under the program, and the company paid him 20 pounds a year for each of them.

Eventually, the New England Company started hearing reports about New Brunswick and how its money was being used by the commission.

The company launched two investigations into the program, one led by Capt. Walter Bromley in 1822 and the other by Rev. John West in 1825.

The investigations confirmed that the students who were part of the program were illiterate, performing forced labour and not being taught properly.

They also found that Indigenous children who did become Protestants during the program returned to Catholicism once they left. The only people benefiting from the program were those who received money from the New England Company.

“They both condemn the greedy white settlers who had oversight of the children,” O’Byrne said of the investigations.

In 1826, the Sussex school and the apprenticeship program were shut down.

After studying what happened in Sussex, Bromley later established a residential school in Shubenacadie, N.S.

“They learned from the failures in New Brunswick and then they moved forward in Nova Scotia,” O’Byrne said.

Later in the 19th century, the Catholic Church operated 12 Indian day schools near reserves in New Brunswick. Survivors of those schools — the last to close was at Metepenagiag in 1992 — have been able to apply for compensation under a class-action settlement reached in 2019 with the federal government.

In a statement last week, Chiefs of the Wolastoqey Nation called on the province to acknowledge the existence of the Sussex Vale Indian Day School and any other schools like it.

They also called for an investigation and a ground-penetrating radar survey of the former school grounds, as well as at  the Shubenacadie Indian Residential School, where many children from New Brunswick were sent.

“Stop pretending as if New Brunswick has no history of these horrific institutions,” the statement said.

New Brunswick Premier Blaine Higgs has said he wants an investigation into the Indian day schools that operated in the province, but his government has yet to release details on how it would take place.

Support is available for anyone affected by their experience at residential schools and those who are triggered by the latest reports.

A national Indian Residential School Crisis Line has been set up to provide support for former students and those affected. People can access emotional and crisis referral services by calling the 24-hour national crisis line: 1-866-925-4419.

For the original article on CBC News, Click Here.

Elizabeth Fraser is a reporter/editor with CBC New Brunswick based in Fredericton. She’s originally from Manitoba.