Donald Soctomah brings lost history back to his people 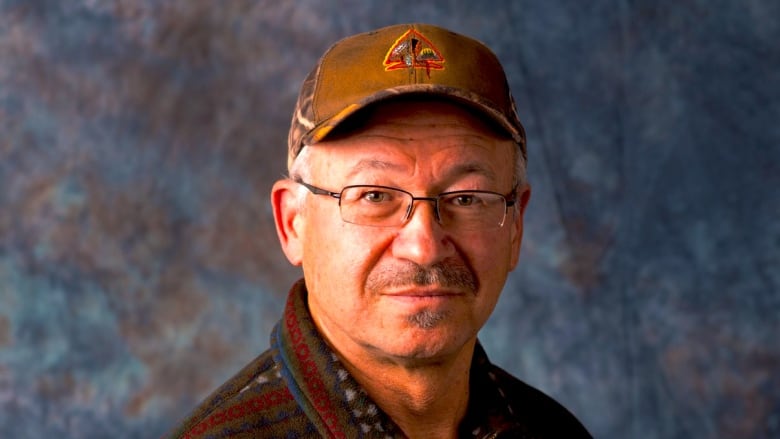 Peskotomuhkati/Passamaquoddy Elder Donald Soctomah in a photo released for the launch of Dawnland Voices: An Anthology of Indigenous Writing from New England in 2014. (Submitted by Donald Soctomah)

Last in a series of weekly stories about Wabanaki elders — knowledge keepers, teachers, healers and spiritual guides — who have made remarkable contributions in their own communities and beyond.

Donald Soctomah is a Peskotomuhkati, or Passamaquoddy, elder who combs everything from beaches to historical records to preserve and restore the stories and traditions of his people.

It’s work that he’s very passionate about and has been nationally recognized for in the United States.

And it makes him feel like he’s carrying on a family tradition because his great-grandfather was his community’s wampum keeper.

That’s “almost like a historian,” said Soctomah. “So I know I’m following his footsteps.”

Wampum are strings of beads made out of shells, such as whelk and quahog, that were woven into belts to document things such as gatherings, wars, chief-making, special ceremonies and treaties.

“There’s a wampum belt for just about every occasion,” said Soctomah. 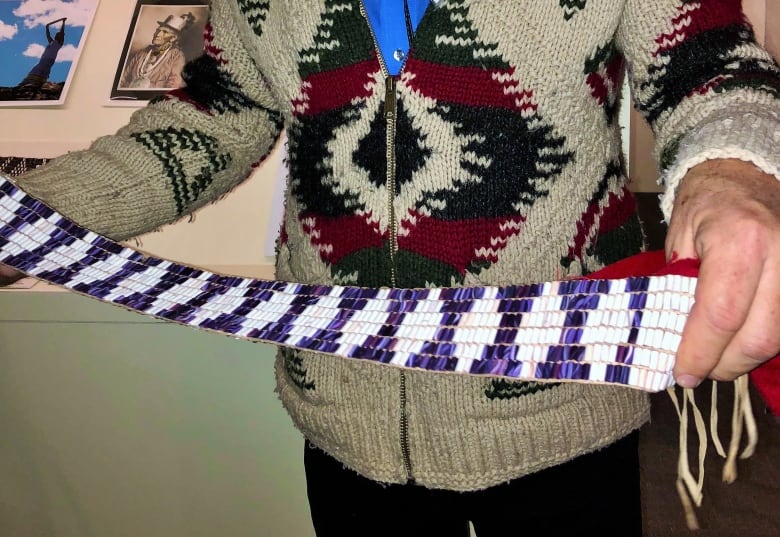 Sapiel Selmore wampum belt held by great-grandson Donald Soctomah. He says this belt signifies a Great Fire Council made up of 16 Tribes. (Submitted by Donald Soctomah)

Soctomah has travelled quite a bit and is a storyteller in his own right. He has written several books. The most recent release was The Canoe Maker in 2019. He also wrote a children’s book about the meeting of the French and Peskotomuhkati on St. Croix Island in 1604. Tihtiyas and Jean was published by Bouton D’or Acadie in 2007.

Like most of his people, Soctomah lives on the U.S. side of the border.

His home is in Indian Township, Maine.

There is another Passamaquoddy community on the coast in Pleasant Point, Maine, or Sipayik.

And a few hundred Peskotomuhkati people live in Canada, in the Saint Andrews and St. Stephen areas. They are in negotiations with the federal government for recognition. 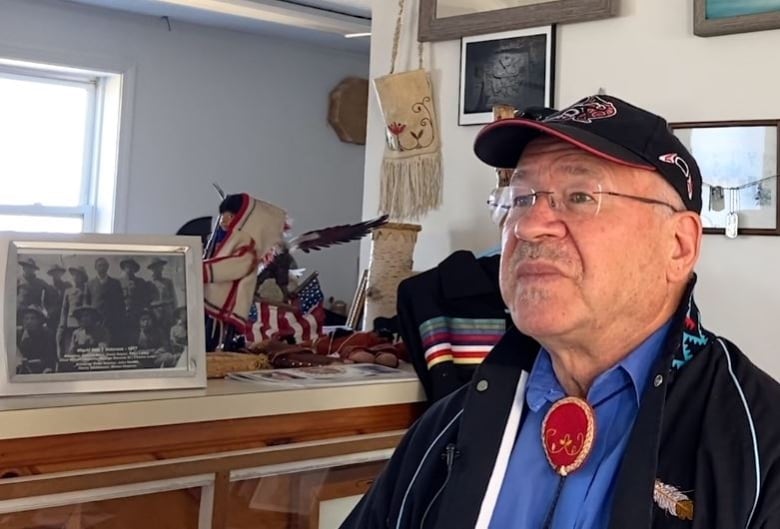 Soctomah, Passamaquoddy tribal preservation officer, was interviewed for a recent documentary about the return of an island to his people, called Kihtahkomikumon (Our Land). (Sunlight Media Collective)

Soctomah works for the entire, 3,700-member Passamaquoddy Tribe, as it is officially known in the U.S.

Previously he was their representative in the Maine state legislature.

His earlier career also included studying and working in forestry.

But since 2002, he’s officially been the Passamaquoddy historic preservation officer.

His job is to gather history, look at the cultural well-being of the community and try to locate traditional sites to help the tribe practise spiritual connection.

He finds the work “relaxing.”

“It sort of fulfils my inner spirit,” he said. 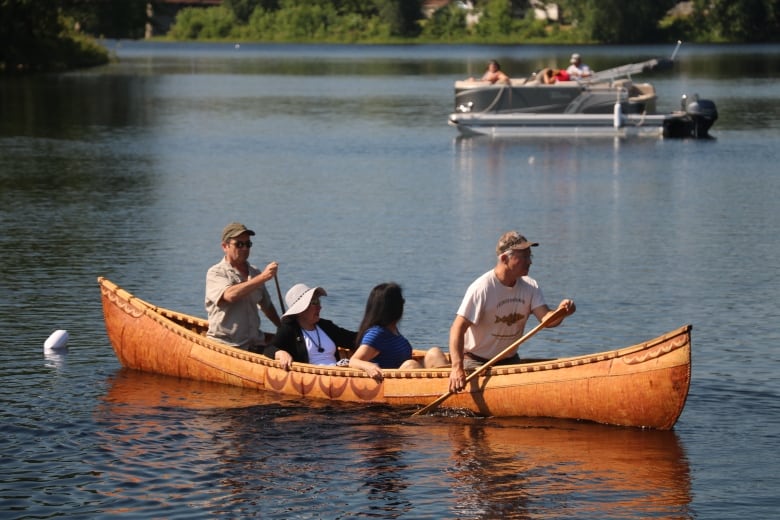 Soctomah paddles on the Penobscot River during a gathering of 25 birch bark canoes a few years ago. This canoe is a recreation of one held by the Maine State Museum, dating to 1850. It’s 22 feet long and ocean-going and was built as part of a community workshop over the span of about a month. (Submitted by Donald Soctomah)

He enjoys tracking down answers for community members who have questions about their ancestors or cultural activities.

“I have this desire in me to find more information,” he said.

“It sort of makes me whole when I do find something like that because when I was growing up, all that information was kept from all of us.

When he finds something and brings it back to the community, he feels like he’s returning something that had been lost.

For example, said Soctomah, when he was a child, there weren’t really any sweat lodges being used. They’d been frowned upon and suppressed by the predominant religious authorities, he said.

But six years ago, the remnants of a sweat lodge were discovered during archeological work along the coast near Machias. 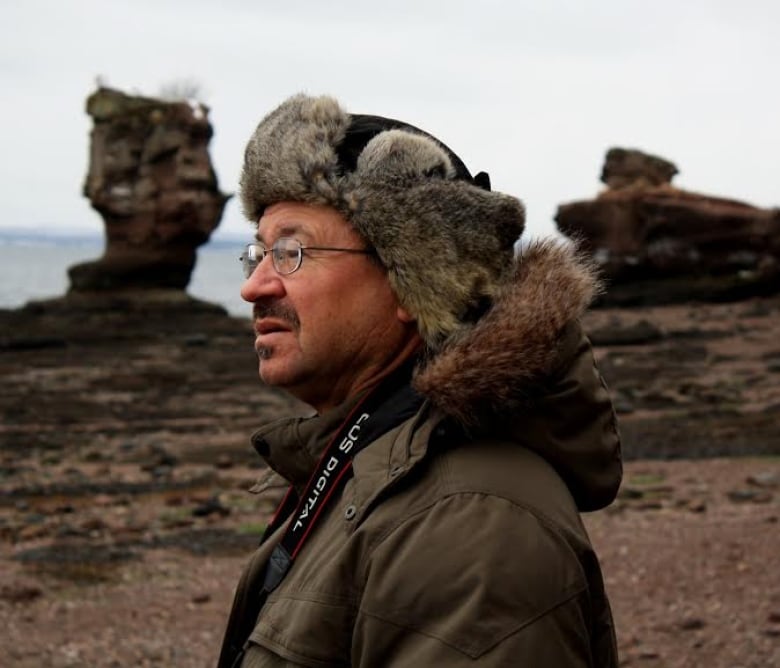 The oldest known Peskotomuhkati site, said Soctomah, is in modern-day Pennfield, N.B., which appears to have been a good area for fishing 13,000 years ago. It was also a good area for blueberries at that time, he said — as it is today.

In 2015, the Association of Tribal Archives, Libraries, and Museums gave Soctomah its International Guardians of Culture and Lifeways “Lifetime Achievement” Award for his efforts to preserve Peskotomuhkati language, history, culture and land base.

Soctomah said four weeks ago, he was nominated by U.S. President Joe Biden to serve on a commission that oversees international parks, including the one on Campobello Island, one of the areas he frequents to search for petroglyphs, shell middens or sweetgrass. 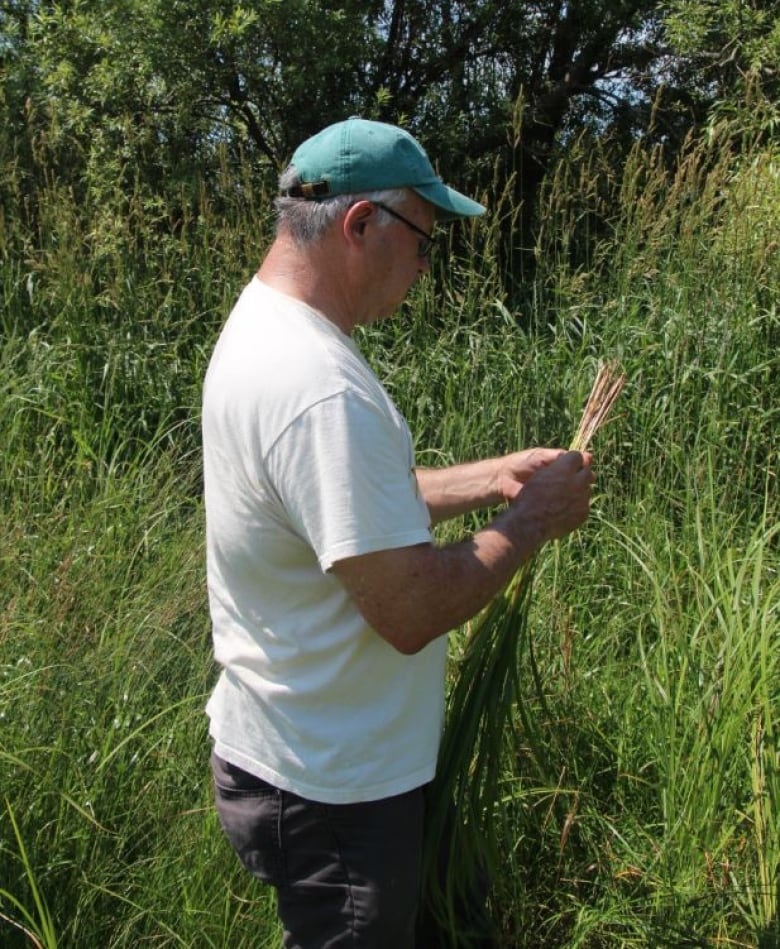 Soctomah taking community members to a coastal area where sweetgrass grows. There are about 100 species of grasses in these areas, he said, but sweetgrass is the shiniest and is reddish purple at the base of its stalk. (Submitted by Donald Soctomah)

Another big project he’s working on is the restoration of some very early audio recordings of Peskotomuhkati songs.

“Sometimes I don’t have any words for how happy I feel,” said Soctomah, “especially when I see something go full circle, like these wax cylinders.”

“I see those children singing the songs that were made in 1890 by probably their great-great-grandfather, grandmother. That’s really rewarding and it’s so powerful that we’re able to do that.”

The wax cylinder was the first commercially successful type of record. It was invented in the 1880s to use with phonographs and was popular until the 1910s, when it was superseded by shellac discs.

The U.S. government had thousands of wax cylinders, and many were of unidentified Indigenous groups. 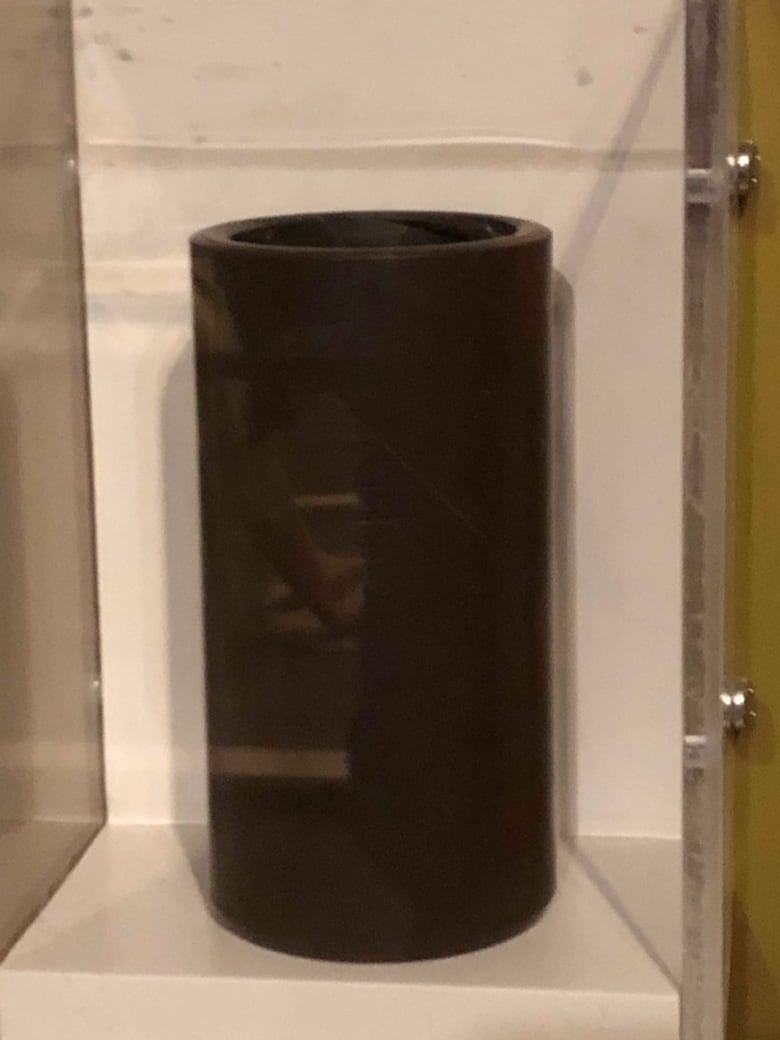 Wax cylinder on display at the Wabanaki Cultural Centre in Calais, Maine. (CBC)

The Library of Congress eventually took over the work, said Soctomah, and first approached his community in the 1990s.

At that point the recordings had been transferred onto cassettes.

It was an exciting discovery, said Soctomah, when it turned out the community of Passamaquoddy along the St. Croix River had been involved in the earliest field recordings of all.

“They were able to find out eventually who recorded this and the date. … and our fluent speakers tried to transcribe a lot of the songs.” 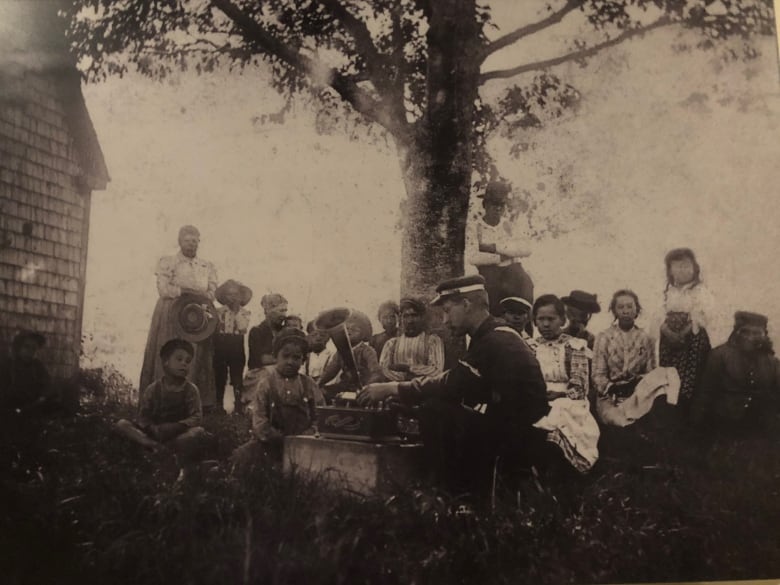 Unfortunately, the recordings sounded very scratchy, he said, and were difficult to understand.

By 2010, they had only managed to get through a couple of the 31 cylinders.

Then, a technological advancement that allowed the Library of Congress to remove the scratch sounds got the project back on track.

They’ve now made it through 28.

The recordings are transcribed into Peskotomuhkati, then translated into English, then brought back to elders for verification.

“I want to make sure that the words are correctly pronounced and the meanings are there,” he said, “so the next generation is going to have the real thing.”

Once they go through all the “checks and balances,” said Soctomah, the recordings will be made more widely available to the community.

You can hear a sample of audio from the wax recordings in the audio segment below.

Donald Soctomah is the Passamaquoddy Historic Preservation Officer. He gathers resources and information, protecting culturally significant sites and artifacts, and connects that knowledge to his community. He spoke with CBC Producer Myfanwy Davies. 11:00

They include songs about travelling from community to community, hunting stories, legendary creatures such as the Thunderbird and animals of the sea and the forest, such as the snake.

“The Snake Song is a very powerful song,” said Soctomah.

Just about every Indigenous group in North America has one, he said.

But over the years, those songs “sort of fell back,” because of the snake’s association with evil in the Bible.

“The church has sort of demonized the snake,” said Soctomah.

For the Indigenous peoples of North America, or Turtle Island, however, snakes are good.

“The snake is one of the first creatures to come out,” said Soctomah.

“It’s a symbol of the spring.

“We hold that in common with all the native communities all over this whole continent.”

The cylinder recordings also included songs about war and peace and one about nature, including the importance of water, the mountains and the trees.

“Once you sing that song,” said Soctomah, “you feel the different layers of connection to each of those.

“Songs are important in our spiritual connection to the earth around us. It’s something that we share with our ancestors. And we also share with the world around us.”

When Soctomah hears the recordings, he said it sort of takes him back in time. 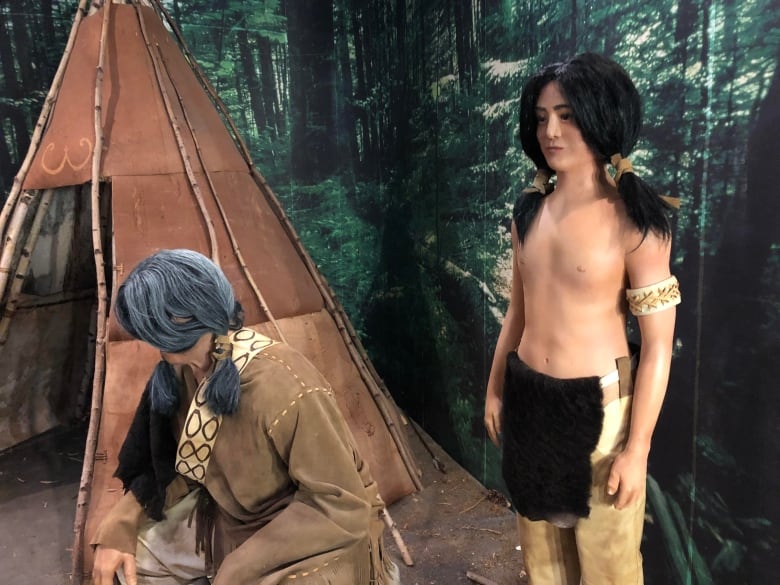 Soctomah provided photographs of Passamaquoddy people so that mannequins at the Wabanaki Cultural Center and Museum in Calais, Maine, would be more true to life. (Megan MacAlpine/CBC)

“A lot of thoughts start to go through my mind. I’m happy that I’m hearing this, you know, after so many years. But it makes me start to think about why were these songs taken from our community and no longer sung? You know, there was a lot of oppression going on.

“The outside world tried everything they could to take our culture and traditions away.”

Soctomah said the Peskotomuhkati managed to hang on to some of their songs over the years, but the wax cylinder project has “brought a new wave” of material to sing.

Young people are excited about playing the songs for ceremonial days, he said. 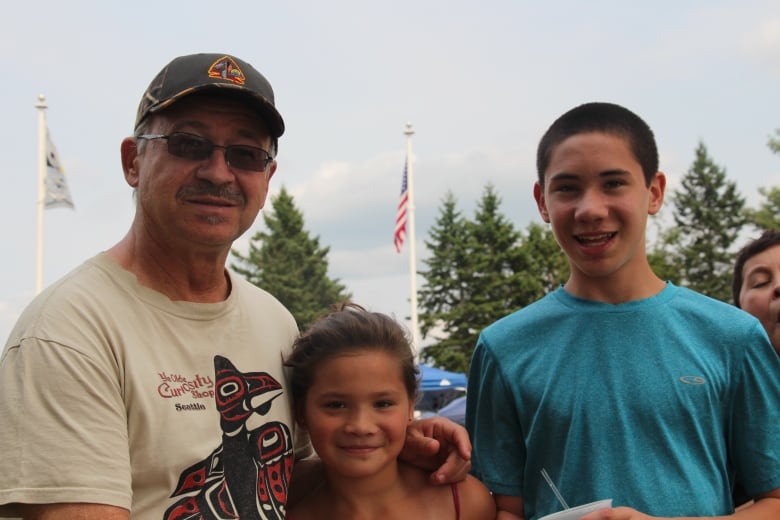 This photo of Soctomah with two of his 11 children, Emma and Don, was taken about six years ago. He also has 21 grandchildren. (Submitted by Donald Soctomah)

And students were “pretty impressed” when the song from the first wax cylinder was performed at a local school.

Soctomah is pleased to see respect growing for Peskotomuhkati history and traditions.

“Within my lifetime, changes have happened,” he said, “And they seem to be speeding up.”

“It’s good for our children that they’re not being pressured on the outside because we’re different.”