It’s not SpongeBob SquarePants, but a brand new kind of sea sponge discovered near Deer Island. 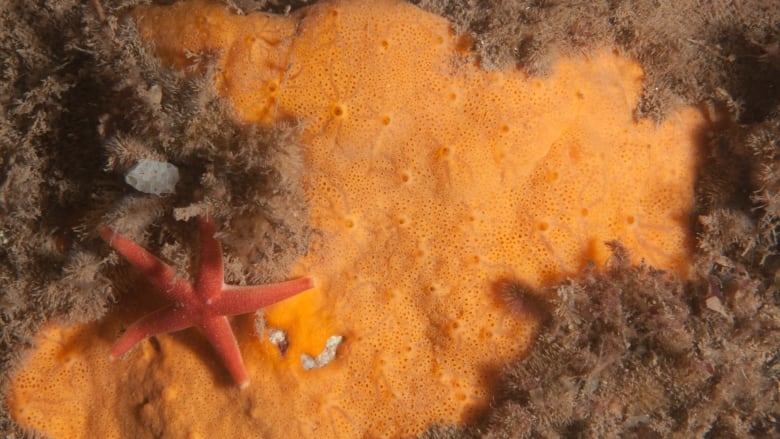 An underwater photograph of Crellomima mehqisinpekonuta, a newly identified sponge species in the Bay of Fundy. (Submitted by Claire Goodwin)

A new species of sea sponge has been discovered in the Bay of Fundy.

Crellomima mehqisinpekonuta is a bright orange creature that grows on ocean bedrock in thin crusts up to 30 cm across.

The first specimen was collected by a dive team from the Huntsman Marine Science Centre in 2016 near Deer Island with assistance from Connie Bishop of COJO diving, said Claire Goodwin, the biodiversity research scientist who identified it as something previously unknown to science.

Additional specimens were found across the bay near Brier Island in Nova Scotia, she said, while doing more survey work with Fisheries and Oceans Canada.

Goodwin has written a scientific paper describing the new species now published in the Canadian Journal of Zoology.

Her co-authors are Curtis Dinn, Javier Murillo and Claude Nozères from DFO,  Ekaterina Nefedova from the Zoological Institute of the Russian Academy of Sciences, and Frauke Nijhof, who used to work with Goodwin at the Huntsman.

It’s “quite satisfying” to name a new species, said Goodwin, even though she’s now done it 74 times, from surveying work all over the world.

Sponges have distinct geographical communities, she said, because they are only larvae for four days. They can’t travel very far in that length of time. And once they mature, they “don’t move much at all.”

Few people have studied sponges, said Goodwin, especially on the East Coast of Canada. But there are an estimated 15,000 species, and so far only 8,500 have names.

“It’s only by making sure we are using the right names that we can accurately document our biodiversity.”

A Peskotomuhkati — or Passamaquoddy — naming committee helped come up with this one.

In their Indigenous language, said Goodwin, mehqisinpekonuta means something reddish orange and animate that gets water squeezed out of it.

The new species was collected during provincially funded surveying to look at the potential of sponges to monitor environmental impacts such as aquaculture in hard-bottom areas.

“We know that some species of sponge can be sensitive to environmental impacts such as siltation,” she said.

Sponges are filter feeders, said Goodwin. They eat very tiny particles in the water — the size of bacteria.

The particles are sucked into a system of chambers, she said, where little cells with tails beat, drawing water in and filtering particles out.

Sponges make those tiny particles in the water column available to other things in the food chain, too, said Goodwin, providing an important link between the water and other life on the sea bottom.

There are “loads of really interesting things to see,” in the Bay of Fundy, said Goodwin.

“We’ve got some amazing habitats,” she said. 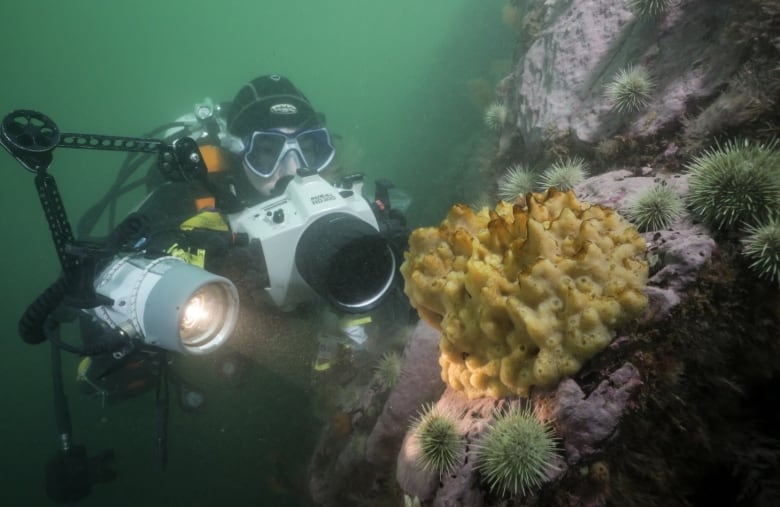 Some areas are “strongly tide-swept,” while others are full of densely clustered sponges and bright red anemones.

The underwater scenery is some compensation for the “painstaking” work of collecting sponges.

It’s done by scraping the bedrock with a sharp knife.

That’s difficult to do, said Goodwin, while wearing the thick gloves that are needed to scuba dive in the cold waters.

Previous surveying work was done remotely by dredging, she said.

That could be why this species wasn’t found sooner. Since it encrusts thinly on solid bedrock, it wouldn’t have been dragged up on loose rocks.

The new species didn’t look much different from other sponges until Goodwin carefully examined its tiny skeleton.

Sponge skeletons come in many shapes, she said.

Crellomima mehqisinpekonuta has tiny semicircular claws, which have many teeth, spiny pointed spicules and smooth spicules that are pointed at both ends.

Her scientific paper also describes a second new species, found on the Scotian Shelf and in the Gulf of St. Lawrence.

Crella (Pytheas) cutis was collected on DFO trawl surveys between 2017 and 2019, she said.

Goodwin plans to keep looking for other new species in the region and on an upcoming survey trip to South Georgia in the Subantarctic.

With funding from the New Brunswick Environmental Trust Fund, researchers are revisiting sites surveyed between 1964 and 1978 by Art MacKay and Marine Research Associates Ltd.

She expects they may find some changes in sponge abundance.

“Some of our species we get around here are Arctic species. So it’s possible that some of them might decrease in number or shift their range further north.”

There are some sponges in the aquarium but not the new species. It’s been deposited in the Atlantic Reference Centre Museum, of which Goodwin is curator.

Posted in News
← What can we expect from our leaders on Indigenous issues?Dr. Roslyn Kunin: The impact the pandemic had on the economy →