A longstanding dream of the Indigenous community in Fredericton is finally a possibility.

The Under One Sky friendship centre is betting on a federal grant program to build a new centre that would allow it to expand program offerings, have a space to practice traditional ceremonies and welcome non-Indigenous people for cultural education.

The centre’s offerings include Wolastoqey language programs and an outdoor-based preschool class. It operates in a small building on the city’s north side.

“It’s really important that we can have a space where we can actually be who we are, stand in our identity and not ever have to apologize,” Under One Sky executive director Patsy McKinney said.

“The challenge has always been space. We just do not have enough space.” 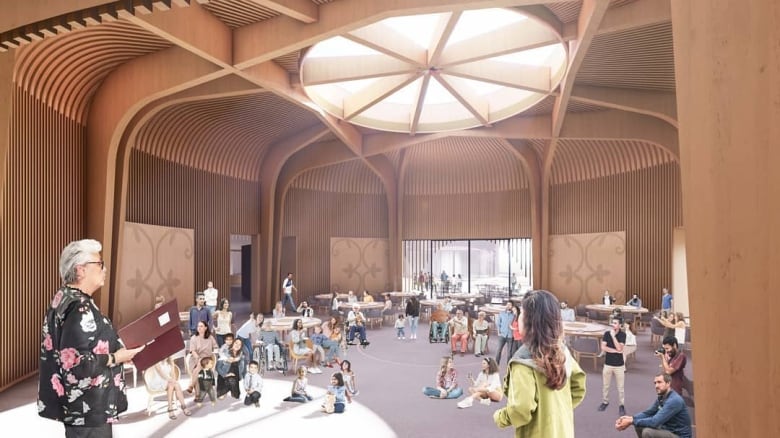 The new centre would include an open space to perform ceremonies or to gather for a harvest. (Fathom Studio/Facebook)

When Infrastructure Canada announced the Green and Inclusive Community Buildings grant program in April,  McKinney said the centre saw it as a long-awaited opportunity.

A team of 15, including Nova Scotia architecture firm Fathom Studio and communications advisers with the University of New Brunswick, scrambled to write a proposal and create a design for the project in just 75 days to meet the July 6 deadline.

Called the Awitgati project, meaning a place to gather and be well, the design incorporates Wolastoqey and Mi’kmaw culture and is inspired by a longhouse.

“They were just incredibly sensitive, they really listened to what we were saying,” said McKinney about the architects.

She said the design is meticulous in meeting the needs of the culture, including having a space that can be opened up so the community can gather for celebrations.

The building is designed in pods that are meant to resemble a collection of rocks in a flowing river, all connected by a shared passageway. The pods each represent one of the Seven Sacred Teachings and form a semi-circle that surrounds an outdoor gathering circle fire pit.

Mi’kmaw Elder Miigam’agan has been heavily involved in the Under One Sky centre and shared her knowledge with the architects to make sure it suited the needs of Indigenous people.

“Patsy and I just wept in joy when we saw it,” Miigam’agan said of the design.

Project co-ordinator Michael Crawford said, in order to qualify for the grant, the centre needed to be a net-zero building. The process would normally take about six months to design a project that required such extensive research. 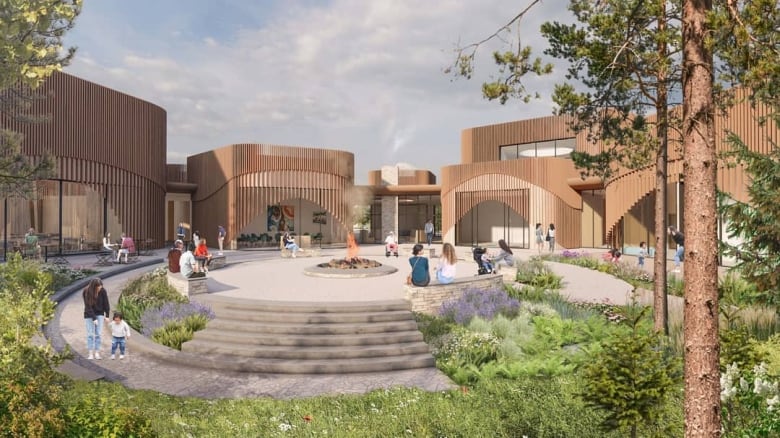 The Under One Sky centre design incorporates Wolastoqey and Mi’kmaq culture. (Fathom Studio/Facebook)

Transportation and Infrastructure Minister Jill Green arranged for the province to donate a 0.3-hectare plot of land next to the current Under One Sky centre for the development.

The total budget for the project is $18.6 million. McKinney said the entire project cost would ideally be covered by the federal grant.

The new development would include a wellness centre for providing culturally sensitive health services and a birthing area with Indigenous doulas and midwives.

McKinney said she hopes this space will be inviting to non-Indigenous people and can be a step toward reconciliation, with programs that can educate them about Indigenous culture.

The centre would generate revenue by renting out space for businesses and events.

McKinney said if the project isn’t selected for a federal grant, she thinks it could gather enough funding from other partners.

A response from the grant application is expected in a few months. If successful, construction would begin in spring 2022 and the centre would begin offering programs by the end of 2023.

“When the facility is finally finished in Fredericton, I think that will be such a powerful monument, evidence of how our relationships are evolving as First Nations with New Brunswick or Canadian citizens,” said Miigam’agan.

Isabelle Leger is a reporter based out of Fredericton.