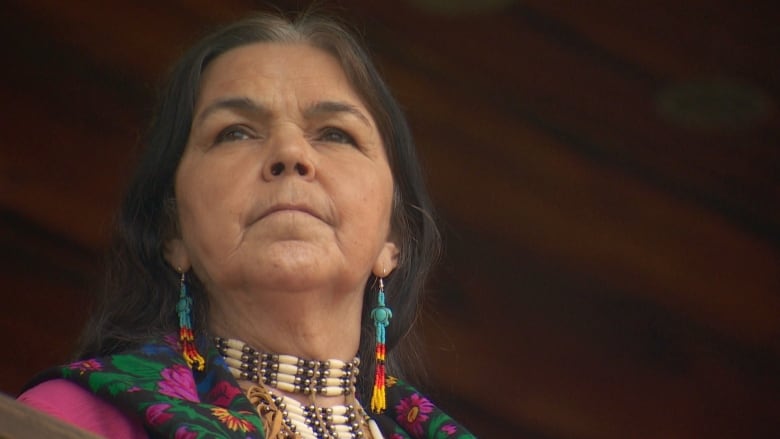 Mi’kmaw Elder Donna Augustine looks out at the river from her home in Elsipogtog. (Mike Heenan/CBC)

Several Wabanaki elders open up about the type of work they do and the roles they play.

Over the next several weeks we’ll be introducing you to several Wabanaki elders — knowledge keepers, teachers, healers and spiritual guides — who have made remarkable contributions in their own communities and beyond.

As a bit of a primer, we’ve pieced together from their own words some of the things that define what it means to be “an elder.”

There seem to be some ties that bind them, but they each put a unique spin on the role.

There are elders you go to with questions about spirituality, for example, said Wolastoqi Elder Imelda Perley, while some specialize in historical account storytelling, and others help heal minds, hearts or bodies.

Mi’kmaw Elder George Paul of Metepenagiag specializes in picking herbal medicines. He has learned a lot about survival skills and traditional outdoor living.

Donna Augustine of Elsipogtog and Aroostook, Maine, does burial ceremonies.

Noel Milliea of Elsipogtog does healing. 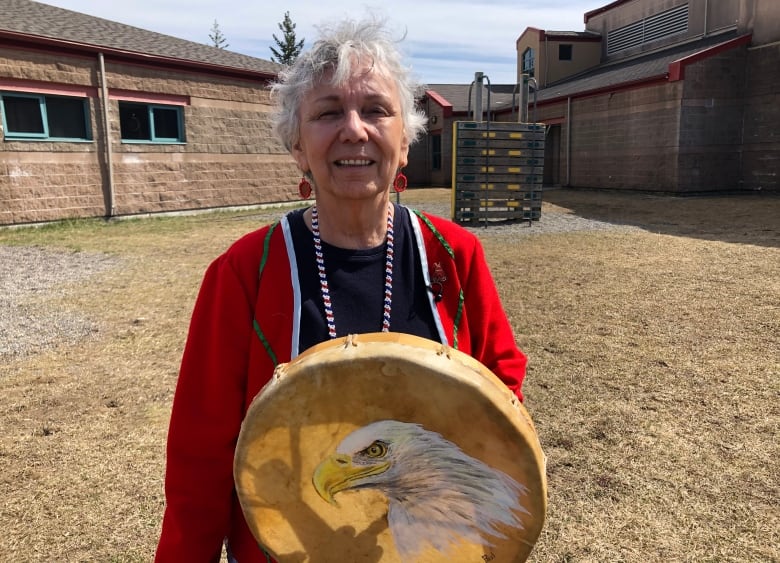 Elders pass on their specialized knowledge in a variety of ways.

Taking part in traditional activities does too, said Donald Soctomah, who works in historic preservation for the Passamaquoddy, who are also known as Peskotomuhkati.

As a child, Soctomah remembers seeing elderly fishermen land their canoes behind his house and clean fish, seals and porpoises on the shore.

“Years later, I realized that was a cultural activity that’s so important,” he said.

Or the teaching may be more formal, in apprenticeships, sweat lodges, schools, health centres or political venues.

“If we don’t remember our roots we may as well stay down,” she said.

Milliea does a lot of “cross-cultural work,” such as sensitivity training. He thinks that’s key to rebuilding the relationship with non-Indigenous people.

A few elders mentioned feeling compelled to help people along paths to well-being.

Sometimes that means performing an emergency ceremony for a community member in a time of crisis.

“There’s many beautiful elders out there that do many different types of ceremonies,” said Milliea.

It makes sense to him that everyone does their own thing. Every First Nation community in the Maritimes, he’s  observed, has its own distinct character.

Elders draw from many sources of knowledge

The elders who spoke with us said their family members were their first teachers.

They also learned from other elders in their community.

Some went on to seek knowledge far and wide.

Perley has had elder teachers from Mexico, B.C., the Arctic and New Zealand.

“We’re supposed to learn from the four directions,” Perley said.

Some people bristled when she started learning sun dances, but she sees it like this:

“Isn’t it better than some of the other things that came to us … like gambling and alcohol and all of that? Nobody complains that that doesn’t come from our tradition, but yet we still do them.”

Some elders gain knowledge through academic or field research.

Perley, Milliea, Brooks and Soctomah are all scholars in fields that include language, sociology, chemistry, biology and forestry.

Some of these elders said a lot of their knowledge had been gained through spiritual practices.

They commune with nature and the spirit world through ceremonies and fasting. And the messages they receive that way inspire and sustain their tireless efforts.

That devotion is surely one of the reasons they are highly esteemed by their communities. 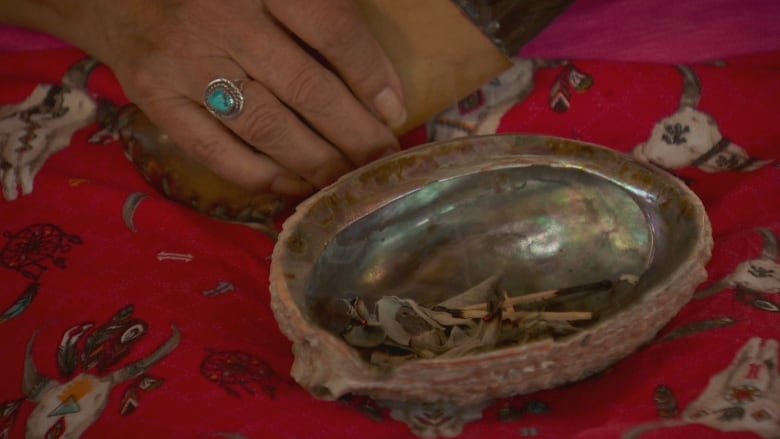 Donna Augustine burns sage and offers a prayer to her ancestors before talking about the work she’s doing on their behalf. (Mike Heenan/CBC)

Elders have the respect of their people

Elders deserve respect for having persevered to keep their languages alive in the face of assimilation efforts, said Soct

“The rest of the coast, until you get to Florida where the Seminoles are, the fluent speakers are gone,” he said.

There are several different ones, said linguist Roger Paul of the University of Maine.

Kcicihtuwin is a being that knows or has knowledge. Kehcikotonet means the one who has lived many years.  And Kci- skicin means a great or knowledgeable surface-dweller.

“Being revered comes from those kinship terms,” said Perley. “And so, naturally, being an elder is revered because you’ve earned the right to have that acceptance that you’re a knowledge keeper.”

Brooks thinks the respect bestowed on elders partly stems from the importance of the survival knowledge they keep.

She feels honoured to be “moving into elderhood.”

“In our culture you don’t decide who you are. The community decides.”

“I’m glad that they feel they can rely on me … and I want them to know I will do my best. If I don’t have the answers I will help them find the answers.”

Also careful not to claim the title for himself, Milliea acknowledged that some people do call him elder, wisdom keeper or knowledge keeper.

“It’s something that’s very honourable to be able to be designated as that.”

It generally takes a long time to become an elder, said Paul.

“It’s like a lived experience. … You have to live the life and know the ways,” he said.

Soctomah said elderhood seems to have crept up on him.

“I look in the mirror and I see that elder looking back. I say, ‘Who’s that guy?’ But I know I have to set an example, both culturally and traditionally, following the ways of the elder so the next generation, hopefully, I’ll leave something behind for them.” 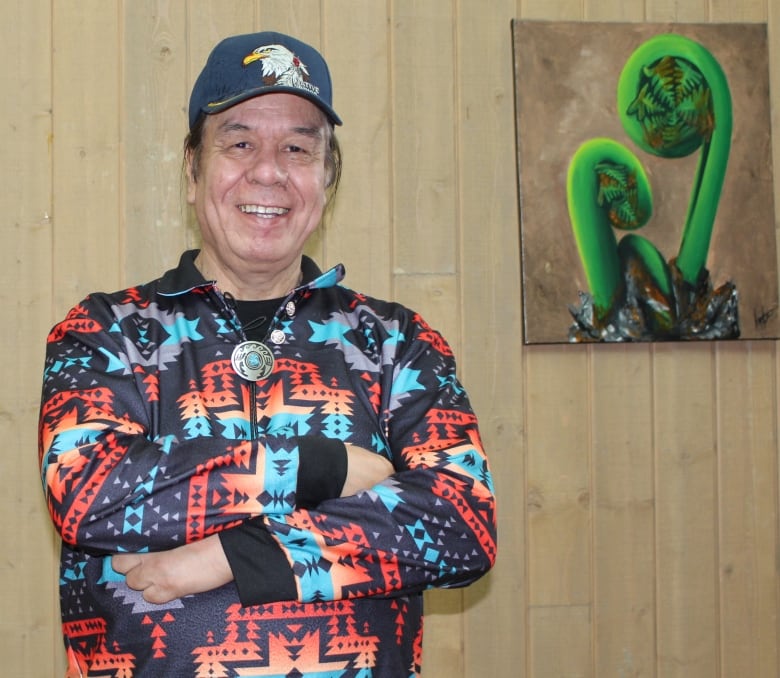 People have been calling Augustine “baby elder” since she was about 35.

To be an elder is an honour and a huge responsibility, Augustine said.

Elders are also supposed to embody and teach values passed down by the ancestors, said Augustine.

Elders have some common values

The values she mentioned include honesty, caring, sharing, respect and unconditional love.

Milliea said one of the greatest gifts he learned from his elders is the art of non-judgment.

“We were all born with this beautiful gift — it’s called purity and innocence. Everybody started life that way. Even the ones that are sitting in prison.”

Perley described the elder code of conduct this way:

“It’s making sure that your words are gentle — that they heal — and not raise your voice to put anybody down. We’re not allowed to gossip. We have to be mindful of how we take care of our bodies. We don’t take things that are overly excessive.”

She learned from a fellow “language warrior” at the University of Wisconsin that letting go of anger is also important.

“It’s a big responsibility to carry the weight of the injustice and try to make it right without being confrontational,” said Perley. “It takes a lot of courage.”

“I’m not done learning yet.”

To Read the Full Article on CBC News, Click Here.